It’s all about people and passion

—— A feel good piece written by Lynn D’Cruz, our project manager of Malaysiakini. 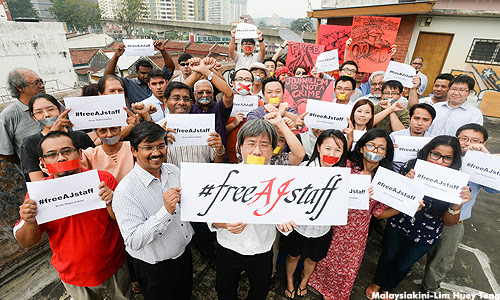 As projects manager, I have the unique position of being ‘Switzerland’ in Malaysiakini. Since I do not belong to a particular department and my job indirectly forces me to serve the whole organisation, I feel a strong affiliation for the organisation as a whole and not in parts.

The benefit of being in this position is the ability to become an observer of the organisation from having both telescopic and microscopic view.

On Thursday, the Malaysiakini management sprang a surprise on its staff. They awarded long-serving staff with a certificate and bonuses. Malaysiakini spends about 50 percent of its meagre profits on its staff and the other half to grow the organisation.

There are around 90 of us in the organisation – half of whom are in editorial, the biggest department which in turn is divided into many smaller sections. Some have served as long as the organisation has been around, which is close to 15 years. These people are the crux of the organisation.

While they carry titles that are really impressive such as editor-in-chief, chief editor, assistant editors, chief reporter, senior journalists, producers, heads of various desks, chief executive officer and managers, each individual carries a spirit far greater than the title. I see them as people of passion rather than position.

These are the people who have served the organisation relentlessly, sometimes to the exclusion of having a normal life, for the sake of independent media. Money is hardly a driving force, passion is.

While you pass them by at the mamak stalls, they really look ordinarily simple. Some appear in flip-flops, most are in jeans and T-shirts, the top guns deck simple non-flashy shirts and they sit in the office on broken chairs and overused tables.

But do they complain? Not a day in their lives.

I’ve hung around long enough to know that while there are the ordinary grouses, the people at Malaysiakini really expect very little in return. There is a force larger than their individual’s physical needs that keep them coming back and serving the organisation like it was a matter of life and death.

Do we fight? Yes, a whole lot, but which family doesn’t? Do we have problem children? Yes, we do, but do we discard them? No, we don’t. Do we provide many, many chances? Yes, we do. Is there an allowance to fall off the bandwagon? A lot of chances. Do we get scolded, when we make mistakes? Gently and sensitively, yes.

Do we get praised when there is a job well done? Absolutely. What is this organisation again? Malaysiakini.

This is exactly how our leaders should run the country – with high level of integrity and awareness for the people’s rights and sensitivities. And recognising that the one true asset is actually the people.

The beautiful part about Malaysiakini is not that it is a perfect organisation. No, we recognise many of our flaws and faults. We are working constantly to improve and make our systems, products, people and surrounding better, but I think the novelty is that we try.

Malaysiakini tries very hard in its own limited capacity to change. The leaders are far from static. They are humble and open to learning, they seek feedback, they try to incorporate what they learn the best they know how to the benefit of the organisation.

The people of Malaysia will respond the same way when they see a genuine effort by the government to care for the well-being of its citizens. The people will rise and give back to the country. When the leader is genuine, the people become genuine.

So, I asked Malaysiakini co-founder Steven Gan what were the intentions behind giving the long-serving staff awards, he said:

“Malaysiakini doesn’t have deep-pocketed investors throwing money at us. We need to earn every single sen we spend.

But whatever we make, we try to set aside half of that to reward our hard-working team members who are really drawing below-market salaries. We can’t afford to pay high remunerations, so the awards is a recognition for their many years of sacrifice.”

When I went over the other co-founder, Premesh Chandran, this is what he has to say:

“Malaysiakini would not have succeeded without the dedication, bravery and teamwork displayed daily by the staff. It’s the way the team does big things and little things that brings the organisation to life.

I have personally learnt a lot from the people in Malaysiakini. They have taught me that to be in a position of leadership is not really a right but a privilege. Not a right to power but a privilege to use the power to empower.

Leaders are often bombarded with almost minute-to-minute decision-making right down to whether this email deserves a reply when they have 5,000 emails to deal with. The true leader however makes a choice in every moment to empower the person or situation they deal with.

The leader who does that consistently will find that very soon, he or she has a great following – because the leader who assists greatest in empowerment of her people becomes empowered herself.

While it was extremely flattering to win the Putra Brand Awards, not once but twice, many in Malaysiakini deserve the Unsung Hero Awards.

The day veteran politician Karpal Singh passed away, two editors rushed to the office at 2.30am to upload stories on the accident, while a number of journalists sought to obtain more information in the wee hours of the morning.

The operations department of Malaysiakini are people whose names will never be published anywhere, but the sacrifices they make are truly immeasurable, and the grace in which they perform their duties are above and beyond anything I have ever come across having worked in several other organisations before.

It would be a crime to leave their stories untold.

Keep up the great work, folks!