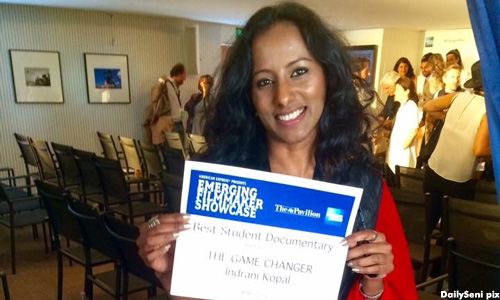 The awards are a part of the American Pavilion’s efforts at honouring excellent work put forward by students and young filmmakers. Indrani’s win marks a first for Hofstra University, where she is currently undergoing a film programme.

“I am just in shock,” Indrani spoke softly when met shortly after the win. “It’s quite overwhelming.”

She was in a dazed state, decked in a saree she wore to the event today.

“All the other films just blew me away. I felt that mine was somewhat mediocre compared to so many of them, and I was really shocked when I found out I won.”

“I’m just going to have a quiet night and maybe catch a screening and go out for a drink by myself,” she stated when asked about her plans for the evening.

Indrani’s film competed against ‘A Portrait of Abuse’ by Nick Chianese and three-minute piece ‘The Emotional Dimensions of the James River’ by Michelle Marquez.

‘The Game Changer’ was made on a budget of US$3,225, which Indrani calculated based on transport fare and meals. It was filmed using school equipment and edited on a Macbook Pro which she invested in by skipping one semester’s worth of tuition fees.

It was a project she carried out by herself, with additional credit to Kurt Sensenbrenner, her cameraman who also transported set equipment and brought her to the prison where she shot some footage. The documentary is mostly set in New Paltz, New York, specifically in MaMa Dance studios as well as the home of Susan Slotnick.

‘The Game Changer’ can be viewed in the documentary corner of the Cannes Film Festival until May 24.